I can still root for her right?

This episode turned the whole universe on its head, both on an individual character level and as far as the world building is concerned. 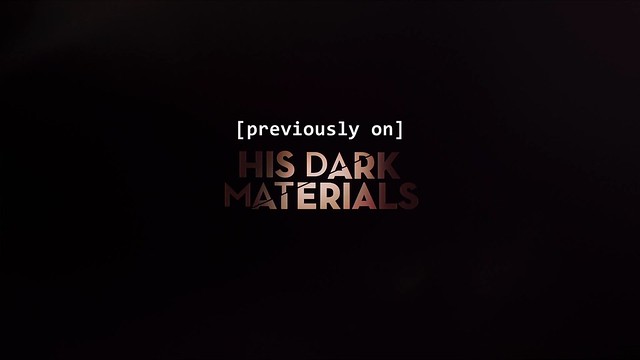 -Don’t know if I love to hate her or hate that I love her, but Mrs. Coulter is truly awful as a person and I can’t get enough of her evil presence. Glad the show did away with the pretense that she could be good early on. However, I think they should have made us understand on an emotional level the true bond humans have with their daemons before revealing how strange Mrs. Coulter and her yet unnamed daemon’s relationship really is. There is something off about that monkey of hers as well… Apart from the fact that they can stand to be apart, why does it never speak?

-Boreal is a fine fine fine gentleman… Not a typo or an exaggeration. The director seems to think so too if the shots we were treated to were any indication. Love that a man of the church has a snake as a daemon. *clutches chest* The symbolism! Also loving that (unresolved?) sexual tension between him and Mrs. Coulter.

-Generally thought it was naughty and oh so nice how most of the daemons the Magesterium’s members had were quite insignificant or even off-putting. I’d enjoy a deep dive into daemon stereotyping and how it affects socioeconomics. I vaguely remember a book quote about how people with house cat daemons were accountants or something, which honestly just makes me wonder if Mr. Pullman’s ever met a house cat.

-I’m slightly uncomfortable by the level at which Lyra is similar to myself at that age. Her decision to be a little shit and talk about something she really doesn’t understand so she can impress and amaze an adult made me cringe and rub my temples in frustration because I was looking in a mirror into the past.

-I appreciate how Mrs. Coulter’s attempt to “civilize” and shape Lyra into an acceptable young woman had so much to do with sartorial choices and tempering her wild astonishment and inquisitiveness in a rather demeaning manner. The aforementioned mirror was back and I hate those dresses on principle.

-It’s unfortunate that I’m not interested in the kidnapped children beyond their relationship to the main characters, and I can’t tell if it’s a moral failure on my part or simply weak storytelling. Maybe it’s a bit of both.

I’m guessing you will have all noticed the absence of imgur in this Recap. I’m using Flickr from now on, because it took me approx 6 hours to upload last time and I refuse to let that happen again (I decide after two hours and ten images uploaded). Apologies if the new format isn’t convenient but I was honestly at my wits end.